Panos Caribbean: "Scaled-up Emissions Cuts a Must for Caribbean SIDS" 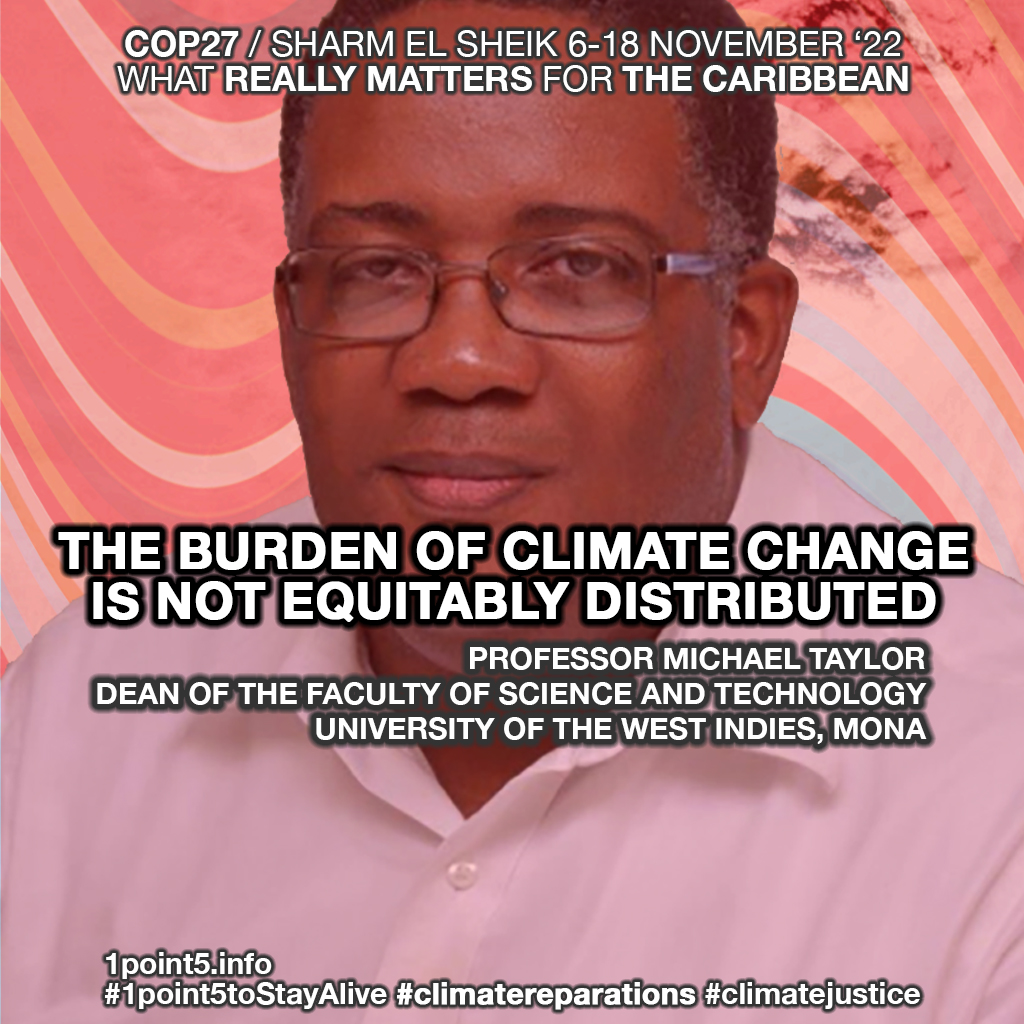 Caribbean climate scientist, Prof. Michael Taylor has thrown his weight behind calls for a comprehensive agreement from the United Nations (UN) Climate Talks (COP27) now ongoing in Egypt – one that is responsive to the needs of the region’s small island developing states (SIDS).

Those needs, he said, include demonstrably scaled-up emissions cuts to hold temperature increases at 1.5 degrees Celsius above pre-industrial levels, as well as financial support for loss and damage.

“The priority issues haven't changed: mitigation to limit future warming to give places like the Caribbean a more livable future; adaptation financing mechanisms in support of adaptation plans which recognise that the future ahead, even at 1.5 degrees, will be extremely challenging; as well as acknowledgement of loss and damage and new supporting financing mechanisms for the most vulnerable for whom loss and damage is already a reality,” said Taylor.

A Physicist and Dean of the Faculty of Science and Technology at The University of the West Indies, Mona, Taylor was one of the lead authors for the Intergovernmental Panel on Climate Change (IPCC) special report on the impacts of global warming of 1.5 degrees Celsius of global warming above pre-industrial levels and related global greenhouse gas emission pathways.

That IPCC report paints a troubling picture of Caribbean and others SIDS in peril because of climate risks and threats, such as extreme weather events and sea level rise, particularly in the event of an overshoot of the 1.5 degrees target, as provided for in the Paris Agreement.

The urgent need for a comprehensive, responsive agreement, the climate researcher said, cannot be overstated.

“The severe weather events being seen across the globe are not inconsistent with what the science has long been saying. What is alarming however is the rate at which we are seeing these manifestations,” noted Taylor, whose statement comes as COP27 negotiations enter their second and final week in Sharm El Sheikh.

“Every year there is new evidence that climate change is occurring at a faster pace than projected and that the world can manage. We are not currently on a path to reversing this and so, as starkly put by UN Chief (António) Guterres, it is important for the world to wake up and realise the unprecedented future we are heading for due to our actions and inaction,” the scientist added.

“His statement also acknowledges the need for increased ambitions with respect to emissions and for action to match that ambition. His words resonate with vulnerable regions like the Caribbean that have long been pointing to the urgency of the situation,” Taylor said further.

Speaking at the high-level opening of COP27 last week, the UN boss made it clear the need for countries to ‘cooperate or perish’.

“This UN Climate Conference is a reminder that the answer is in our hands and the clock is ticking. We are in the fight of our lives and we are losing. Greenhouse gas emissions keep growing, global temperatures keeping rising, and our planet is fast approaching tipping points that will make climate chaos irreversible,” Guterres said.

“We are on a highway to climate hell with our foot on the accelerator. The war in Ukraine, other conflicts, have caused so much bloodshed and violence and have had dramatic impacts all over the world. But we cannot accept that our attention is not focused on climate change. We must of course work together to support peace efforts and end the tremendous suffering. But climate change is on a different timeline, and a different scale,” he added.

Meanwhile, Taylor said he is encouraged by the discussions so far around just transitions.

“This picks up on climate justice issues which recognise that the burden of climate change is not equitably distributed. So, for example, even moving to more sustainable economies and adaptation solutions must be managed in ways that see the benefits and burdens being equitably shared. This requires that all stakeholders must be at the discussion table, with mechanisms in place to ensure that the most marginalized voices are especially represented,” he said.