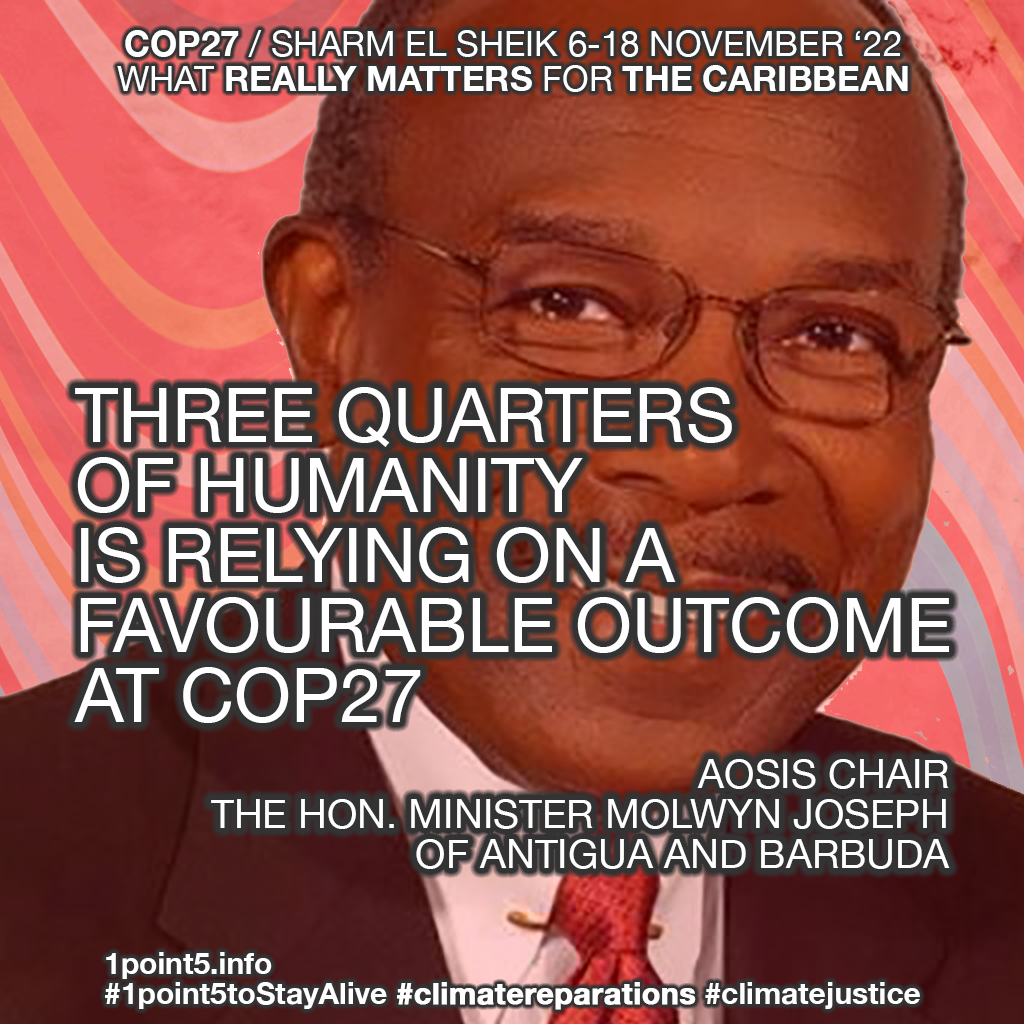 Caribbean and other small island developing states (SIDS) are intent on securing a decision for a financing facility for loss and damage associated with climate change, despite what has been a reportedly frustrating week and a half of negotiations at the United Nations Climate Conference (COP27) in Egypt.

In a statement shared earlier yesterday (November 16, 2022), the Alliance of Small Island States (AOSIS), which represents the interest of 39 SIDS and low-lying developing countries, made clear their displeasure with the negotiations that have so far yielded “a lack of progress” on arrangements for loss and damage that result from extreme events, such as hurricanes, and so-called slow onset events, including, sea level rise and warmer global temperatures.

“We have come too far to fail on loss and damage finance. Three quarters of humanity is relying on a favourable outcome at COP27. AOSIS and our fellow developing countries have toiled for the past thirty years to be heard on this issue,” AOSIS Chair, the Hon. Minister Molwyn Joseph of Antigua and Barbuda, said in a statement shared with the public.

“AOSIS has worked tirelessly this year to build consensus, devise a clear loss and damage response fund proposal, and ensure the commitment of the international community to come to COP27 and negotiate on this issue in good faith,” he added.

“Now we are here, and some developed countries are furiously trying to stall progress and even worse, attempting to undermine small-island developing States. So, not only are they causing the worst impacts of the climate crisis, they are playing games with us in this multilateral process. There have only been informal consultations, to date, of this critical agenda item, and no official launch of negotiations through a Joint Contact Group,” Joseph noted.

Dr. Colin Young, Executive Director of the Caribbean Community Climate Change Centre (5Cs), who is also in Egypt for the negotiations, mirrored his views.

“CARCIOM is holding strong to its position that is also an AOSIS position, which is a red line to get a decision that reflects the establishment of a loss and damage facility. What is happening is that the developed country parties are expecting us to accept a process decision which does not end in any tangible decision that there will be a facility in place,” he explained.

It is now necessary, Young said, for CARICOM – whose members are a part of AOSIS – together with the larger group of AOSIS countries and the Group of 77 & China, to maintain a united front in order to get the decision they want on loss and damage.

“We always knew it was going to be difficult but I think our ability to secure something beyond just an empty process is going to be contingent on AOSIS and the G77 and China standing strong and united,” he said, highlighting that “there are also attempts to fracture and divide the group”.

According to Joseph, the “signs of willingness to engage from countries such as the United Kingdom and New Zealand” are encouraging, but other developed countries must get on board.

“AOSIS is sworn to serve the vulnerable women, children, and men of our countries who deserve not just to survive but to thrive. Our countries have been pushed to their very limits, and there is no lifeline in further delay tactics. We did not cause this crisis, we are bearing the brunt of the suffering, yet we are the ones constantly asked to make concessions,” he insisted.

Meanwhile, the 5Cs boss said CARICOM nationals can be assured that their negotiators and ministers are representing them well.

“Our citizens should feel sure that the ministers are holding strong, advocating for nothing less than a decision that reflects that a facility will be established … We are cautiously optimistic that we will get a decision that reflects and acknowledges that a facility will be established and we will work through a process to deal with the various elements within a year or two,” Young added.