In Pictures: The Caribbean at #COP27

Straight outta #COP27's Sharm El Sheik: A few pictures of the Alliance of Small Island States & the Caribbean hard at work to get rich nations to pay for their mess. 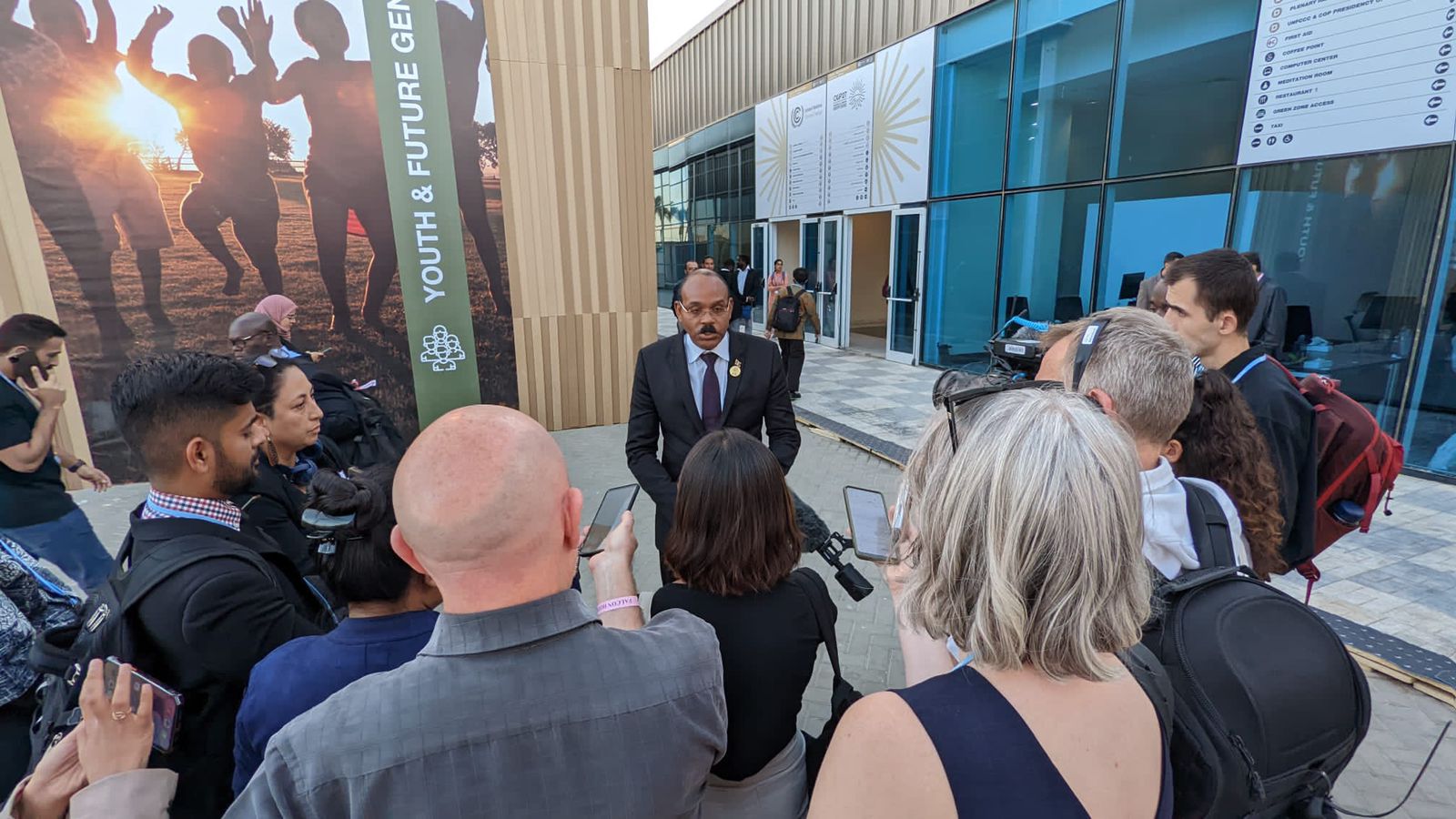 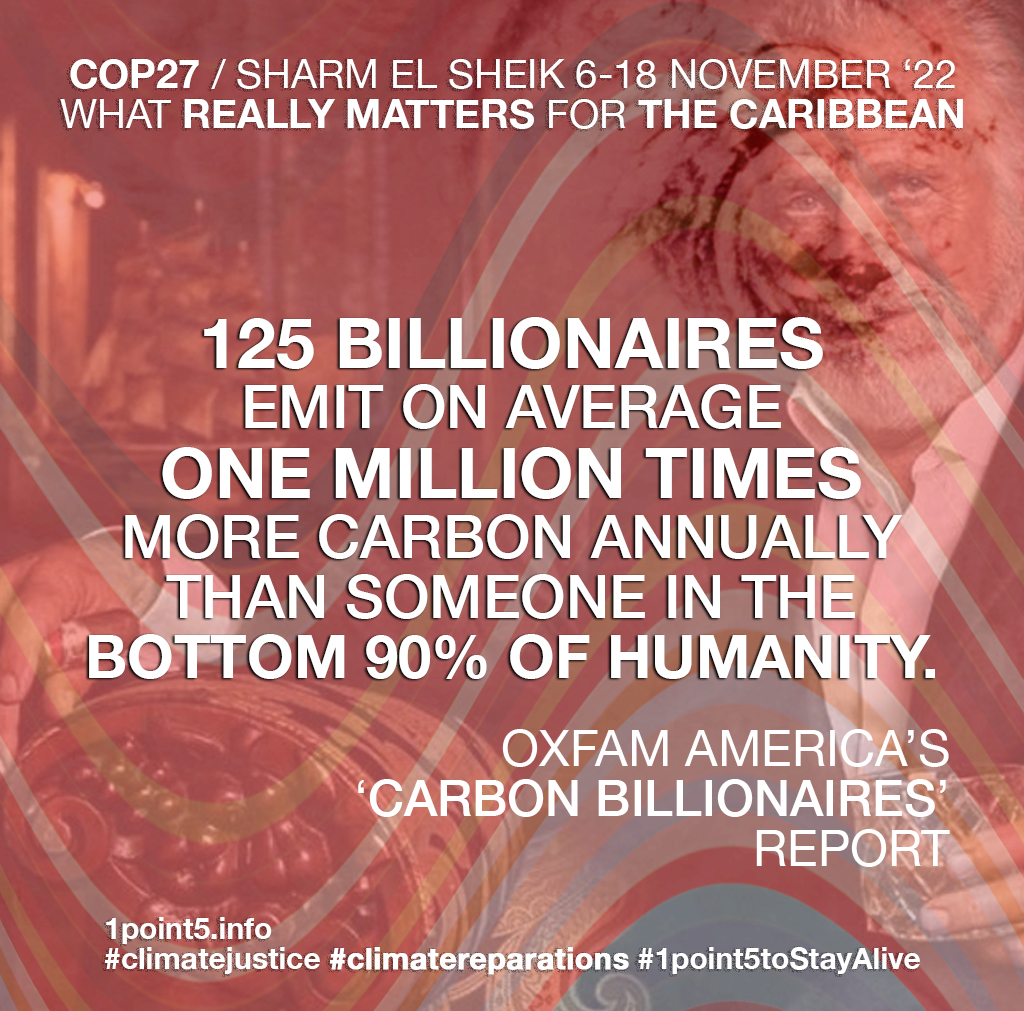 The Caribbean Community Climate Change Centre (5Cs) is throwing its weight behind safeguarding the introduction of a financial mechanism for loss and damage and progress on scaled-up financing for adaptation, at this year’s United Nations Climate Change Conference (COP27). 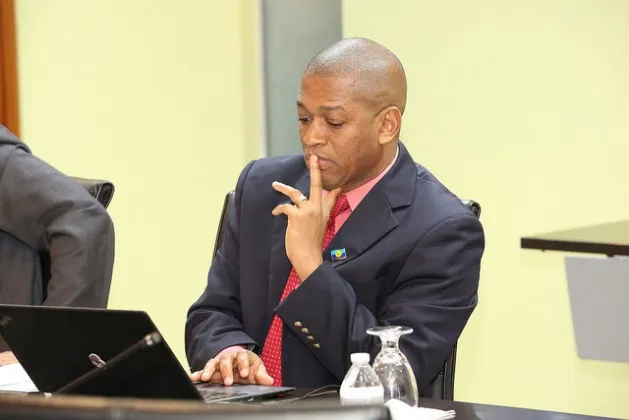 COP27, which got underway in Egypt yesterday (Sunday, November 6), sees the participation of global leaders, members of the scientific community and civil society stakeholders, including those from the Caribbean, who are gathered to discuss and negotiate current climate change realities.

Mia Mottley, Prime Minister of Barbados at the Opening of the #COP27 World Leaders Summit

COP27 - MESSAGES - WHAT REALLY MATTERS FOR THE CARIBBEAN 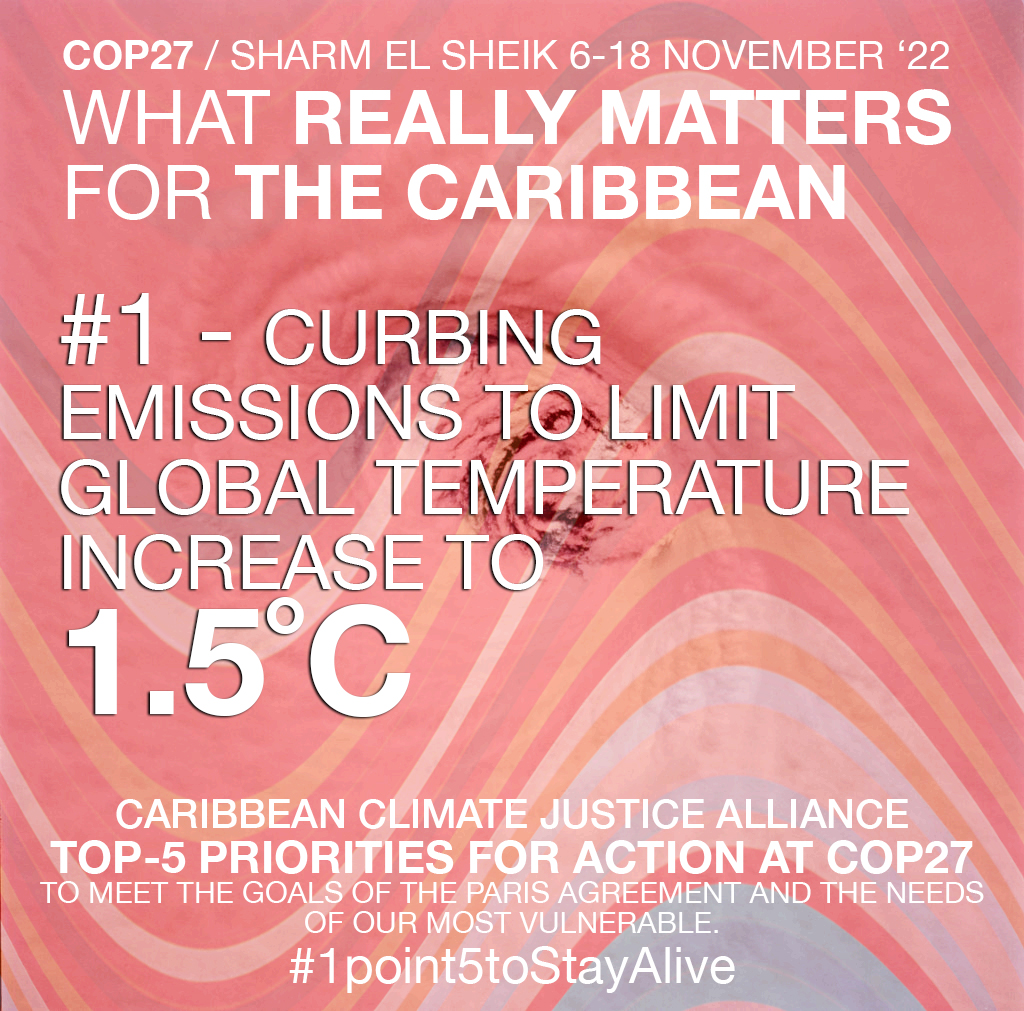 The Caribbean Climate Justice Alliance has released a Statement ahead of the UN Climate Conference (COP27), which will take place from November 6 – 18, 2022 in Sharm el-Sheikh, Egypt. Right now, technocrats are busy getting their documents in order; emission-unfriendly planes and private jets are being boarded; and political leaders are polishing up their grand speeches – updated from COP26. Civil society organisations are girding their loins for another battle, and reporters, citizen journalists and academics are seeking to make their voices heard amidst the din.

CARICOM MINISTERIAL STATEMENT AHEAD OF COP 27

The Ministers considered the scientific and geopolitical context and the prospects of a global recession in 2023 which will have significant bearing on global action to address the polycrises of climate, energy, food, health, environment, development and security;

They reiterated that global warming represents an existential threat to CARICOM and reaffirmed their full commitment to limit the increase in global temperature to well below 1.5 degrees Celsius;

The Working Group II contribution to the IPCC Sixth Assessment Report assesses the impacts of climate change, looking at ecosystems, biodiversity, and human communities at global and regional levels. It also reviews vulnerabilities and the capacities and limits of the natural world and human societies to adapt to climate change.

“While negotiators are in hot pursuit of a quick conclusion they are continuing to undermine their commitments to upholding human rights while opening a Pandora’s Box of false climate solutions that will only serve to blow a hole in ambition. Once governments strike a deal on this, there will be no do-overs. And negotiators must think carefully about what they are doing before it is too late. If they can’t get it right in Glasgow, they should pause negotiations rather than pass an irreversible threat for communities in the Global South and future generations.”

The climate conference is described as the “whitest and most privileged ever”. (...) One exception was Prime Minister of Barbados Mia Mottley – described as a ‘regional rockstar’ after an inspiring opening speech, and the Amazonian activist Txai Suruí who brought attention to the devastating deforestation of the Amazon. Afterwards, Txai shared that she was nervous to speak in a foreign language (English) to a mostly white, male audience.

PM of Barbados Mia Mottley kicks off open & honest discussion to deepen understanding of #LossAndDamage and ways to avert, minimize and address it.

Even with a rapid scale-up of adaptation action, climate change will still have an impact. So the risk of losses and damages from climate change is growing. This session will bring together experts to deepen our understanding of loss and damage as well as debate how we can take practical actions to avert, minimise and address loss and damage.

OECS: "OECS is Making its Voice Heard at COP26 in the Race to Deal With Climate Change"

CANARI: "In confronting the climate crisis, workers are a critical part of the solution"

Every day, whether it is during or outside of the hurricane season, people who live and work in SIDS know only too well that climate change is a reality and that it affects everything that they do. Workers especially feel first-hand the impact of increasingly intense hurricanes, floods, longer periods of drought, and intense heat. Public services workers are on the frontlines responding to the impact of the climate crisis. And perhaps better than anyone, they know that there is a very high price to pay for inaction.

Dr. JAMES FLETCHER: "SIDS continue to have to fight tooth and nail to get the smallest concessions"

Prime Minister Mia Mottley delivered the speech at COP26 that all negotiators from Small Island Developing States (SIDS) have been waiting and yearning to hear a SIDS head of government deliver on our behalf for years. She hit on all the right points, she spoke with the authority and confidence of someone who understood the subject, she commanded the stage and she delivered with a passion and eloquence that caused every international leader and celebrity in the audience to listen with rapt attention.

We, Heads of State and Government, and high representatives, of the Climate Vulnerable Forum (CVF) from Africa, Asia, the Caribbean, Latin America, the Middle East, and the Pacific, and forming a significant number, and a representative group, of those countries most vulnerable to the adverse impacts of climate change, meeting in-person and virtually, as convened from Dhaka, and in Glasgow during the World Leaders Summit of UNFCCC COP26, in October and November 2021,

Alarmed at the recent findings of the IPCC’s Sixth Assessment report (AR6) which confirmed that the warming of the climate system is accelerating with the world on track to reach 1.5ºC as early as 2030, with certain adverse impacts of climate change, such as extreme heat spells, set to nearly double in scale by then compared to impacts at 1ºC, as society now finds itself firmly within an escalating climate emergency,

Further alarmed at the conclusions of the UNFCCC Secretariat’s 2021 reports on Nationally Determined Contributions (NDCs) under the Paris Agreement, wherein a large number of parties to the Agreement, including a number of major emitting countries, failed to comply with the Agreement by updating or renewing enhanced NDCs, and whereby a major shortfall in contributions to limiting warming to 1.5ºC prevails, though highlighting that the 1.5ºC goal can still be kept alive if 2030 emissions are 45% below their 2010 levels, which requires drastic, constant and urgent ambition raising especially of major emitting countries prior to 2030,

All the more alarmed by reports of the unmet UNFCCC collective climate finance commitment of the developed countries to mobilize $100 billion in annual, additional climate finance, with balanced funding for adaptation and mitigation, from 2020, and the threat that this default poses for confidence in the Paris climate regime in addition to weakening support for climate action by developing countries and our member states,

The 26th Meeting of the Conference of Parties (COP26) to the UN Climate Change Convention in Glasgow, UK represents a critical moment to tackle the climate crisis and set us on the pathway to a low carbon and resilient future. CANARI joins other activists and civil society organisations across the globe in calling for urgent and strengthened commitments to limit global temperature increase to 1.5C and address the needs of the most vulnerable communities and countries including Caribbean small island states.

WORLD RESOURCES INSTITUTE: "We’re Not on Track for 1.5 Degrees C. What Will it Take?"

A new report, the State of Climate Action 2021, looks at whether we are doing enough to achieve the Paris Agreement’s goals. It finds that, to date, none of the 40 indicators assessed are on track to reach 2030 targets.